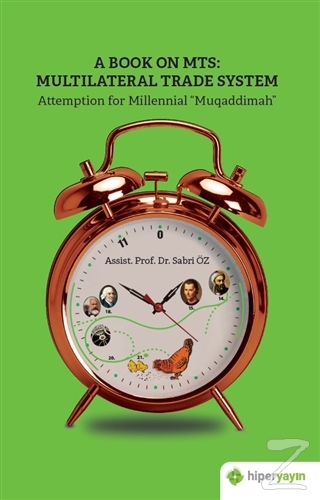 A Book On MTS: Multilateral Trade SystemAttemption For Millenial Muqaddimah

Sabri Öz  /
Hiperlink Yayınları
Initial Backword to Millennial Muqaddimah: Multilateral Trade System (MTS) is chosen as a Millennial Muqaddimah (Foreword). It is known that, many disciplines are related with trade phenomenon. The war, religion and also technology are determined to show ...

Initial Backword to Millennial Muqaddimah: Multilateral Trade System (MTS) is chosen as a Millennial Muqaddimah (Foreword). It is known that, many disciplines are related with trade phenomenon. The war, religion and also technology are determined to show some effects on trade in this book that has also included contemporary issues of the World which are realated with international trade. It is stated that there is a need to create new trade theories under the fact that everything will be transformed in the near future. On the other hand, the book has a literature review over MTS institutions and their policies beyond the enhanced scope of MTS such as environment, sustainability, poverty etc. Other factors affecting international trade are planned to be explored in a series. Will see, God knows the truth! The Muqaddimah, wri‑en by Ibn Khaldun, reflects the fourteenth century and especially North African region situation on their history, civilisation, education, politics, states and emirates etc. However, it is understood that, the stated topics really suit to the other region and states even today. For instance, in human resource, how to select the qualified person for a job is very interesting case mentioned at Muqaddimah. The mistakes on that issue, made seven century ago, are also relevant today. Nepotism is working on instead of talents and acknowledgements. As he implied in the fourteenth century, geograph is still being a destiny of nations. The lifecycle of the nations are still seemed to be the same as human life. But in some cases his foreseen may be changed today, or at least need to be transformed. For instance, he pointed out, the past is more like the future than water looks like water. If the changes of technology and transformation would change a Creation version from Creation7.11 to Creation7.12, as claimed by the author, the last statement of Ibn Khaldun will be false. And he would probably had been changed the language of his book. If Ibn Khaldun had been alive today, he would had wri‑en Muqaddimah probably in English! Ibn Khaldun also implied that the available is more important than should be! Todays transformation is on future events and forecasting situations. On the other hand, that the definitions of wage, income, susenance, and capital are changed already. As Karl Marx, Ibn Khaldun claimed that the only thing for production is the the human-hands (rather than labour). Beyond information and human-capital, will Industry 4.0, cobotic technology, AI replace with labour? Will see, God knows the truth! This book is essentially a born for Millennial Muqaddimah. The globalism vs nationalism, traditional capitalism vs digital capitalism and the new era of social welfare and new normalization aer Covid-19 on economic integration have been reviewed for the sake of forecasting the new international trade. As a last word, for an initial backword of this book: The world is less than a gram virus but greater than the five. Anyway, Millennial Muqaddimah will go on… God knows the truth!